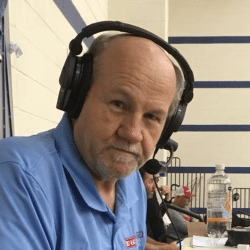 Jim is a veteran of 40 years experience in Oklahoma radio news and sports broadcasting.

Prior to his work in Durant, Jim spent 16 years as co-host of Friday Night Finals, a statewide high school football scoreboard show heard on the Oklahoma News Network.

Jim has also worked as a news and sports anchor/reporter at WKY and KTOK radio stations in Oklahoma City and has written for the print media in Mustang, OK and Durant. He earned a degree in broadcasting from Central State University (UCO) and was an all NAIA district first baseman for the Broncho baseball team.